This month's ad roundup includes some top picks from the first wave of holiday ads, but there were also plenty of non-holiday gems for those of us that would prefer to keep the pine trees and snowflakes at bay for another few weeks.

Read on to get the scoop on the most sentimental, adorable, and unexpectedly funny ad campaigns from the past month.

In this clever ad for a brand of cat treats, agency adam&eveDDB created the perfect holiday wonderland -- complete with sparkling trees, a Christmas roast, and even an electric train set. Then they invited 22 cats to rip it all to shreds in spectacular fashion.

"The internet is full of cats being cute and fluffy, but in reality cats are incredibly mischievous," client marketing director Denise Truelove said to AdWeek. "That tension led to something quite fun in this Temptations holiday video and campaign."

Unsurprisingly, the cat actors weren't super easy to work with. It took three weeks for handlers to train the feline hoard for their dramatic entrance and exit, and three days to collect shots of them gleefully destroying the set.

In this bizarre but undeniably charming spot for eyewear retailer Georgetown Optician, a family of oddball opticians (inspired by the company's real founding family) visit their formidable matriarch, Grandma Ida, at her lavish Gothic residence.

When the family's heirloom pair of glasses suddenly goes missing, a fantastic whodunnit ensues, complete with a pack of evidence-sniffing hounds and plenty of surreptitious sideways glances from the quirky cast.

The meticulously designed ad was produced by DC-based agency Design Army, whose nearly obsessive attention to detail pays off. The Wes Anderson-style characters, wacky, well-paced plot, and wonderfully exaggerated narration combine to create one of the most delightfully unique ads we've seen in a while.

When a June 2014 cover of TIME Magazine declared "Eat Butter," the farmers at Organic Valley rejoiced -- their time to shine had finally come. This cheeky spot chronicles the end of the "war on butter," interviewing farmers about how they've cultivated better organic butter over the years when consumers shunned the "rich, creamy semi-solid gold."

Organic Valley and Humanaut are no strangers to producing quick-witted campaigns. Back in May 2016, the pair parodied artisanal coffee shops by selling $2 shots of half-and-half coffee creamer. The stunt was number eight on our list of creative branded pop-up shops.

Have you ever heard the folktales about beautiful mermaids luring unsuspecting sailors to their death? This animated ad for France's National Maritime Rescue Organization offers an imaginative spin on the classic legend, inviting us into the mind of a lovesick mermaid. When she spots a drowning sailor, her mind runs wild.

As the mermaid imagines the perfect life she'll share with the sailor, she leaves out one crucial detail: He can't breathe underwater. Luckily for the sailor, he's wearing a life jacket.

Agency Barton F. Graf is known for their endearingly unusual campaigns, and their latest spot for Ketel One Vodka is no exception.

In their quest for absolute perfection, the Vodka connoisseurs at Ketel One have a complicated, multi-step approval process in place. It starts with a signature from a member of the distillery's founding family, and ends with an identity theft expert interrogating the company's real-life chairman, Carl Nolet Sr.

If you're in need of some warm and fuzzy feelings this holiday season, look no further than this pair of traveling teddy bears. Havas London produced this Heathrow Airport ad, which follows a couple of elderly teddies as they traverse the terminals of the massive British airport, from landing to baggage claim.

When the bears finally meet their family at the arrivals area, they're magically transformed into real human grandparents. The biggest miracle though is making a journey through the airport look like a whimsical adventure.

A roundup of November's best ads wouldn't be complete without a much-deserved shoutout to John Lewis. The UK department store just dropped their much-anticipated follow-up to the Cannes Lion-winning "Monty's Christmas," and it's already gained over 17 million views on YouTube since its release on November 9th.

Produced by adam&eveDDB, the ad begins with a dad setting up a trampoline on Christmas Eve for his daughter. After he retires for the evening, a curious parade of suburban critters discover the trampoline, and proceed to have the time of their lives. The only one left out of the fun is the family dog, but -- as you'll see in the spot -- he eventually gets his chance join in on the fun.

If you don't appreciate a good poop joke, stop reading now. Toilet deodorizing company Poo-Pourri released an extended ad that chronicles the evolution of bathroom decorum, lamenting the pungent unpleasantries our ancestors must have endured without Poo-Pourri to mask the smell of, ehem, "Zeus' thunder."

Poo-Pourri's in-house marketing team created the ad as part of their ongoing campaign featuring Scottish actress Bethany Woodruff. If nothing else, the ad gets major points for coming up with some creative euphemisms for going number two. Our middle school selves are very impressed.

It would be a stretch to say the end result has any narrative, but their use of so many taglines to construct a form of super-ad is inventive and fun to watch. AgencySpy wrote up a transcript of each slogan if you have trouble catching them all in the ad.

Kids get to ask Santa Claus for presents every year -- but where does that leave parents? This ad promoting Lexus' December sales event finds two mischievous parents cheating the system by forging a note to Santa in their young son's handwriting. Anxiously scrawling the note out in crayon, they ask Mr. Claus for -- what else? -- a brand new Lexus.

Produced by agency Team One, the piece is part of a light-hearted series depicting parents asking Santa for Lexus.

Want to see more great ads? Check out 10 of the best ads from October here. If you've seen any great ads lately, let us know in the comments or tweet us at @HubSpotAgencies.

"I had a bad day." How often do you find yourself saying that? Once? Twice? Several times throu...

I have money in my savings account because my bank has a built-in auto-deposit process. I’m no... 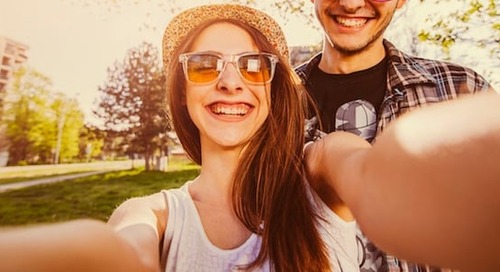 Some of the greatest discoveries of all time came to fruition at the intersection between two ideas. Think about it: Peanut butter and jelly sandwiches, pajama jeans, and sporks ......